Nazarene Missions International is people praying, giving, building, and engaging all ages with the good news of Jesus.

Links is a network of personal connections between missionaries and Nazarene districts around the world.

Participating missionaries are assigned to districts to help foster a personal connection between missionaries and the local church. A Links relationship fosters a sense of involvement with Nazarene Missions through regular correspondence from missionaries, updates from their field of service, and presentations by their Links missionary when they are on home assignment. 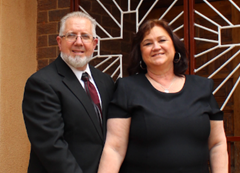 Michelle is part of the Regional Finance team

Tim and Michelle Eby serve as commissioned missionaries with the Church of the Nazarene in Africa. They moved to Johannesburg, South Africa in January 2018 to begin assignments at the Regional office.  Tim is now serving as the Africa Regional Jesus Film and Evangelism Coordinator and Michelle is serving as part of the Regional Finance team.  Pray for them as they support the national leadership, encourage other missionaries, coordinate partnerships, coordinate work and witness teams, and encourage church growth across the Africa region through the ministry of the Jesus Film.

Tim grew up on the mission field in Papua New Guinea with his parents Lee and Carol Ann Eby.  He felt a call on his life to mission service at the age of 16 and pursued his education in aviation at LeTourneau University in Longview, Texas.  Michelle is also a missionary kid from Beirut, Lebanon where her parents Larry and Sharon Buess served with the church of the Nazarene.  Tim and Michelle met in High School, prior to attending Trevecca Nazarene University, and with similar goals and calling in life were married in 1987.  In 1988, with a B.S. in Aviation Technology, his commercial pilot licenses, and all his mechanic ratings, Tim began his career in aviation in Atlanta, Georgia.  Over the next 9 years he gained experience before being deployed as a missionary pilot to East Africa.

In August of 1997, they were assigned as Nazarene missionaries to the Africa East Field to open the work for Nazarene Mission Aviation.  They also worked to expand the church through out East Africa until 2003. The Ebys took a three-year leave of absence serving as youth pastors in Moscow, ID. Tim completed his masters in Christian education with an emphasis in youth and children ministries. He also completed his course of study and was ordained as a minister in April of 2006 on the Northwest District. They returned to Africa in November 2006.  Tim worked in leadership development and church growth in the country of Senegal and across the Africa West Field. Michelle served as the treasurer for the field and supported local ministry.

They have 4 children and 4 grandchildren.  Chris is married to Cristen and they have twin boys and a girl, serving in the US Army and stationed in Washington State. Heather, is married to Marc Trembly and they have a little girl, living in Iowa and serving at Demoines First Church of the Nazarene. Amber is married to Derrick DeMars and is working as a counselor in Auburn, AL.  Jonathan is working in Nashville, TN and looking to serve using his passion of permaculture and sustainable agriculture.   The nest is quite empty these days!

God continues to work through the ministry of Tim and Michelle as they serve Him on the mission field.  Their passion is to see the development of national leaders who will lead the church in Africa to maturity and significance. Their positions require much travel and great wisdom as they develop tools of evangelism and discipleship that are effective for the African context. Please pray that God will give them strength, wisdom, and safety as they teach and preach the Good News of Christ in every corner of Africa.

MISSION – Compassion as a Lifestyle

Following the example of Jesus, Nazarene Compassionate Ministries (NCM) partners with local Nazarene congregations around the world to clothe, shelter, feed, heal, educate, and live in solidarity with those who suffer under oppression, injustice, violence, poverty, hunger, and disease. NCM exists in and through the Church of the Nazarene to proclaim the Gospel to all people in word and deed.